Funding from Aberdeen City Council's Creative Funding programme allowed 57 North to undertake research and collate data into music industry infrastructure in Aberdeen, in order to inform specific and targeted sector development that will attract other funds to the city.

This research was to follow a model of identifying pathways within and into the music industry, focussing on performing, recording & distributing recorded material.

The mapping exercise was designed to provide a basis for a collective approach to delivering longer-term development programmes and help clarify where facilitated development activity could have the most impact.

The exercise also introduced 57 North to individuals and organisations we did not previously know and helped inform and extend our reach and effectiveness.

The timeline agreed in early 2020 saw us beginning to gather data in February and March. It became clear quickly that we could not continue with surveys and interviews as though nothing had changed, so we added a new section to the consultation questions that asked directly about the impact of Coronavirus and how 57 North could support sector recovery, when the time was right.

We adapted our plans to gather data, working exclusively online and via telephone for semi-structured interviews instead of in-person. Responses were slower in coming than we had anticipated but as the pandemic unfolded, some of those that had been reluctant to discuss the sector while it was closed changed their minds.

Instead of having an event to share our findings and consult on new funding proposals in May, we held an online Music Industry Focus Group via Zoom at the beginning of July. This was a very successful event and a stimulating discussion about the music industry sector and possible ways forward, even while the sector was effectively closed for business.

What have we learned?

About the profile of our research participants

The profile of our respondents included a range of ages, levels of experience and levels of income derived from music industry activity. We heard a lot from those who have been involved in the sector for more than a decade but also reached some music students who are at the beginning of their professional pathways.

Many of our consultees have multiple industry roles, either because they are fulfilling something for their own band or to diversify their music related income. 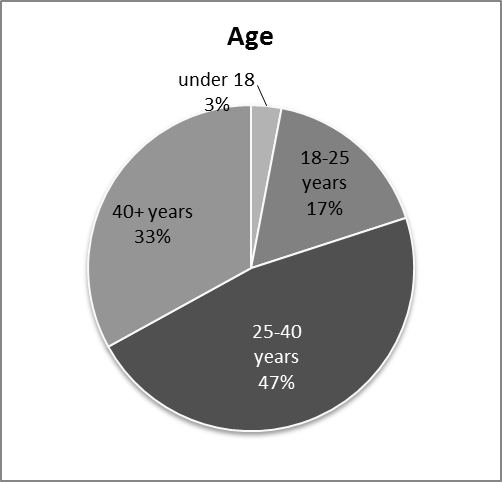 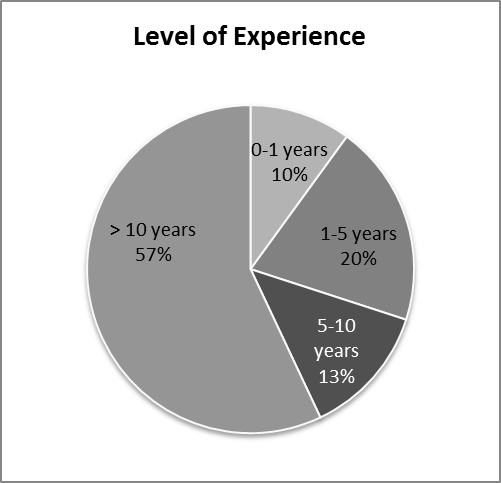 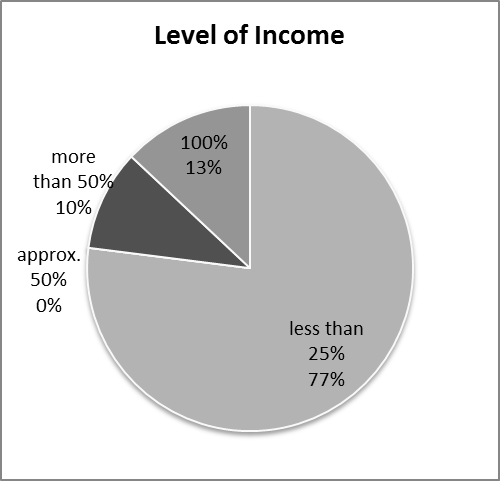 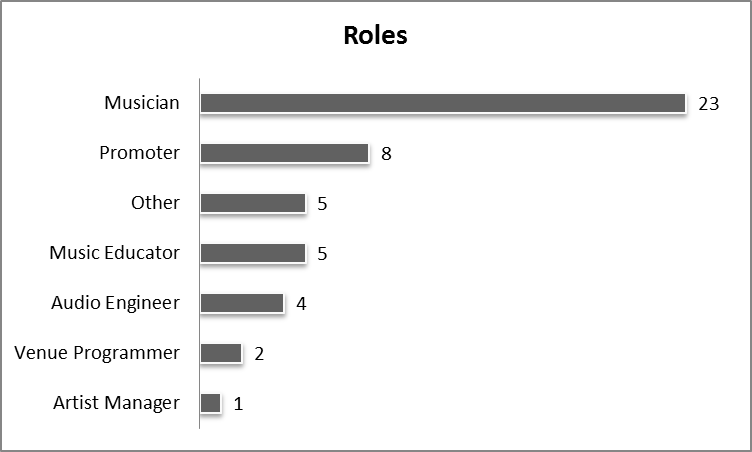 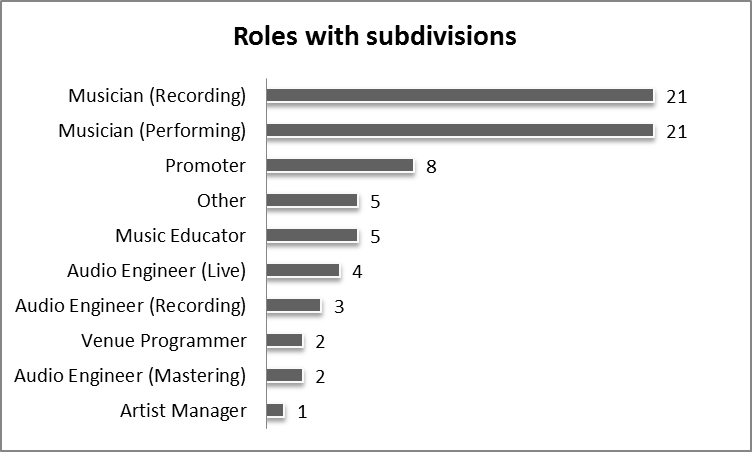 About the profile of the sector in Aberdeen

Work to audit professional industry facilities in Aberdeen was not completed due to the disruption to business for these organisations created by lockdown, that made many unavailable to participate during the period of research. It was decided that the potential for the data to be out of date by the time restrictions are lifted was significant and its publication could be viewed as insensitive or out of touch with current concerns. Instead the research focussed on individual professionals, some of whom represented organisations.

Data that was gathered about the organisations represented and used by our consultees will be retained and used in future developments.

The data gathering for this mapping research was inevitably impacted by the unfolding pandemic and lockdown that took place in March 2020. We asked musicians, engineers, promoters, programmers and others to tell us about their experiences, what would help them on their professional journeys and what they would like to see more of in Aberdeen.

Understandably, the responses we received were going to be shaped by external factors and so we asked music industries professionals to reflect back on how they got started, rather than think about current circumstances, which were addressed specifically in the additional Coronavirus and recovery questions we added to the consultation.

Rehearsals take place in a range of spaces with approximately half of those we talked to using a part of their home or other private space, and half using local commercial rehearsal spaces. Young respondents also made use of education spaces for rehearsal when they could.

We gathered a range of stories and experiences of securing a gig locally, and we asked everyone what they thought would help make pathways clearer for themselves or others. Selected illustrative comments are below.

What would help musicians with preparing for / securing their first gig?

What would help you to book more Aberdeen-based musicians and bands?

What would help audio engineers in Aberdeen?

73% of the musicians we consulted had experience of recording material as well as performing live and they shared their stories and experiences with us. Of these, 63% had recorded in a professional studio setting with 50% having experience of DIY recording as well, some for demos and some for released material. 135 of this group used facilities at the college to record their material.

20% of the musicians we talked to described travelling to parts of the Central Belt to record at specific studios or with specific engineers/producers in order to record material.

What would help musicians with recording their material?

What would help musicians with releasing / distributing material?

Above anything else, what one thing would help you most regarding your music industry activities?

Training received to date among our consultees was a mix of formal (university, college), informal via events or one-off workshops, and non-formal or ‘on the job’ training, though a significant proportion had received no training to date related to their music industries role/s.

Promotion, marketing and audio engineering skills came out strongest among musicians that responded to the mapping survey. Some interest in staging events was also evident as seen in the word cloud of responses below. 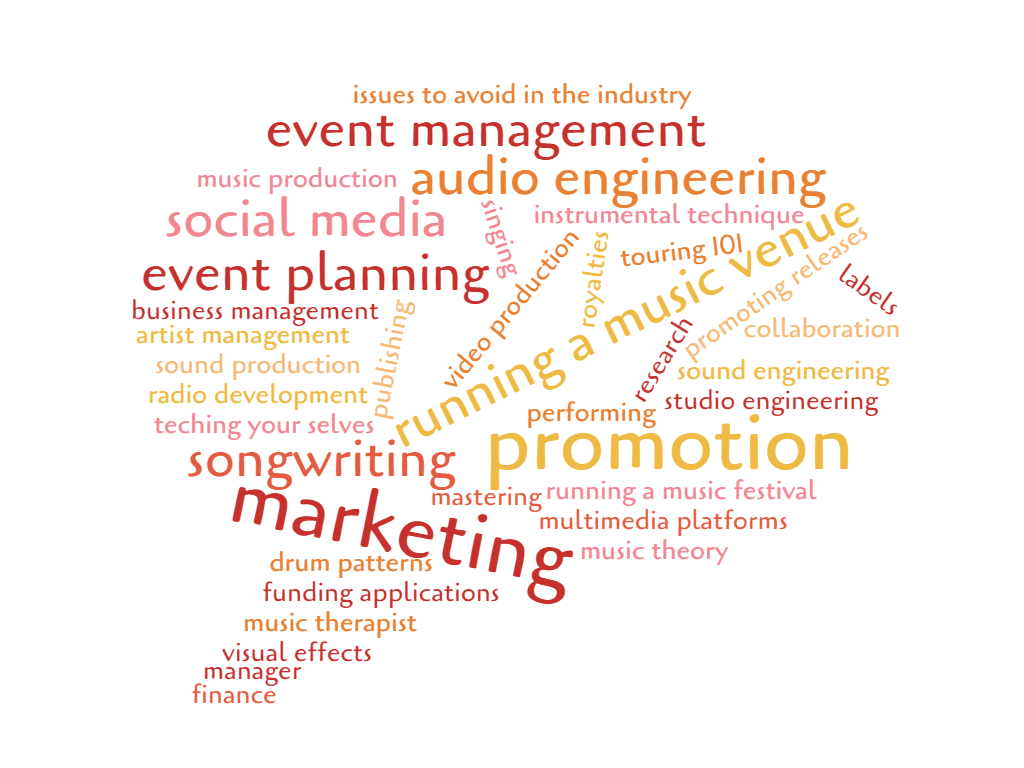 Audio engineers told us that hands-on learning in live contexts would have been beneficial for them if available, either through mentoring/shadowing or work experience placements.

The challenges featuring most prominently in our findings are:

The strengths of the sector featuring most prominently in our findings are:

There is evidence of a desire to collaborate and to make more happen, and to support each other to grow things in Aberdeen.

The researchers have reflected that most of those who responded to the asset mapping research were positive about the possibility of forming some kind of platform for further discussion of the current challenges and to explore solutions.

This informed the decision to hold a focus group style online discussion, which further refined the research and resulting proposals.

Responses indicate willingness to re-imagine how we are doing things and how we can sustain critical elements of the industry locally. Understandably, some comments have also highlighted how significant a risk the current state of play is for the music sector, particularly the live music sector.

Walk on By workshops

For secondary school musicians: Learn with professionals at The Blue [more]

John from 57N And David from HMUK chat about the [more]

Hit The Road touring project back open for applications

24/7 helpline for anyone working in music in the UK

Presenting The Marley Experience the No1 Tribute to the late [more]

What a treat to end the year. The great Buster [more]

John Miller and his Country Casuals

The Blockheads in Aberdeen Formed in 1977 to promote Ian [more]

Vivian Comma paints the Madonna, visibly on the verge of [more]

The Kymatiks + Fish & The Kelpies + Toastie